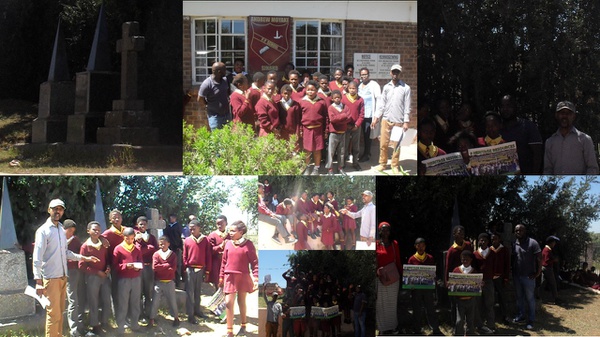 #HeritageResourcesRegeneration_CleanUp Development Plan has taken today on this beautiful summer day the 14th of October 2019, to introduce the Andrew Moyake Primary School Grade 6 & 7 Learners to the Lobengula Gravesite at Kwa-Ndancama, Fingo Village. The King Lobengula Foundation is currently conducting Educational Tours to Heritage Sites that were the result of Colonial infiltration into the African Continent. The Township Heritage Tour begins with the story of Rhodes kaLobengula kaMzilikazi who was alienated from his Tribesmen for over 125 years after the 1894 Matabeleland war and buried at Kwa-Ndancama Township [a place of lost hope] without regret from the British Royalty in the hands of Queen Victoria. The Lobengula Graves are almost 200m from the Old Queen Victoria Cemetery, which has been a home for some of the World War 2 Veterans Soldiers, who fell into false promises by the British Government.

The Long Hidden Walk to Discovery which was launched during the Lobengula & Mandela Art Exhibition on the 18th of July 2019, that was held at Princess Zila Lobengula Museum at Fingo Village, with its Theme “The Impact of Colonialism in our Society Today, & and the Road to Reconciliation, will firstly be on Rhodes Lobengula and Rhodes Cecil John. It is quite interesting to investigate such a rich history, which is full of myth and mystery, as we come to understand the reasons for the A.N.L.kaLobengula the son of Mzilikazi to be taken so far, to the eastern corner of the African Continent. A lot of Historians have come up with different views and folklores had inspired some to dig deeper and search for the truth, concerning the disappearance of the descendants of the King Lobengula after the war. The stories of King Solomon’s mine had led European Pioneers to plunge into the African soil destroying everything in their path without regard of the community structure of the Indigenous Nations.

The #HeritageResourcesRegeneration_CleanUp is aimed at restoring our History and Heritage, by not only ‘cleaning up’ the environment, but Collecting and Archiving relevant Information. Hence, the Princess Zila Lobengula Museum is also acting as Interpretation Centre, for all the data that is collected and shared especially amongst the Young Children who are the future ‘custodians’ of these rich Heritage Resources. The East Side of the City, which forms part of the landscape that was forcibly given to the Black People during the Apartheid era, was once part of the nine (9) wars between the Xhosa People and the British Forces. The war for Grahamstown [Makhanda] in 1819 between the Xhosa’s and the ‘Allied Forces’ is one of the many that has turned this beautiful landscape into a burial site, hence we have the Egazini Memorial Precinct.

The 1,5km Township Heritage Trail Tour will leave a Scholar or a Visitor fascinated by the great wealth of Ancestral history hidden within this Valley of the City of Saints, as it sometimes referred to by the Locals. It is one the Cities that you will find an avenue of different Religious Denominations.

#HeritageResourcesRegeneration_CleanUp is campaigning for the Restoration of Heritage Resources for the Mutual Benefit of our Society, hence we always invite our People from ALL corners of the world to come and share with us their stories, of course well Researched information to come forth, and experience Adventure Tourism, and at the same time create #PEACE&UNITY.